Death of a Witness 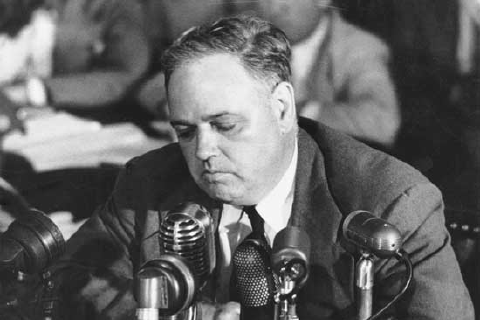 Historical Notes: Death of the Witness

In the summer of 1948, a squat, rumpled man took the witness stand before the House Un-American Activities Committee and made a series of accusations that changed the temper of his times. The accuser was a journalist named Whittaker Chambers. The accused was Alger Hiss, a longtime high-ranking State Department official who had been at Franklin Roosevelt‘s side at Yalta and had helped to write the Charter of the United Nations.

Chambers’ sensational charge: he and Hiss had once worked hand in glove for a Communist spy ring operating in Washington during the ’30s.

Chambers’ startling statements touched off an impassioned and bitter national debate. At first, public sentiment favored Hiss, for the case seemed to turn solely on the word of a confessed Communist agent determined to destroy a man who had been the trusted colleague of such officials as the late Senator Arthur Vandenberg and former Secretaries of State Cordell Hull, Edward Stettinius and James Byrnes. Most of the U.S. was still reluctant to believe that Communism could have penetrated the Federal Government. Then, bit by bit — as if hesitating to reveal the extent of the conspiracy and his own involvement — Chambers produced the evidence that finally sent Alger Hiss to jail for lying, when he said that he had not given official documents to the Communist Party.

Secrecy & Mystery. But the effect of the Chambers-Hiss case was not confined to the sentencing of one man and the vindication of another. During the hearings, President Harry Truman charged that the whole affair was a Republican-plotted “red herring” — and his quip became a political boomerang, evidence that the Democrats were “soft on Communism.” Dean Acheson, Truman’s Secretary of State, insisted stubbornly that he would not “turn his back on Alger Hiss”—and came under political attack that seriously curbed his effectiveness. A young California Congressman named Richard Nixon became a national figure by prying information out of the reluctant witness.

In the aftermath of the long, lurid expose of espionage, the country’s intellectuals argued endlessly about betrayal, turncoats, witch hunts and political innocence.

Last week, at 60, Whittaker Chambers died of a heart attack at his 300-acre farm in Westminster, Md. And even at the end, the man who had looked on life itself as a vast, compulsive conspiracy was wrapped in a cloak of secrecy not of his own devising. In an effort to preserve some semblance of privacy, his family did not announce his death until after his body was cremated.

Outrage & Hope. “I am an outcast,” Chambers wrote in his bestselling autobiography, Witness. He traced his feeling of isolation to his birth, as the unwanted child of a struggling commercial artist and a thwarted actress. Chambers was raised in Lynbrook, on the south shore of Long Island, where “family life festered incurably at the heart of our home.” At one point. Chambers’ father deserted his wife and two sons and sent them an allowance of only $8 a week. Chambers’ mother developed a fear of prowlers, and took to sleeping with an ax under her bed. Chambers himself was soon tucking a knife under his pillow. Chambers’ brother became an alcoholic, and killed himself by drinking a quart of whisky and cushioning his head on a pillow inside an oven.

Chambers was convinced that his brother had committed suicide largely out of despair with the world—a despair he himself soon came to share. In 1925 he quit Columbia University to become a Communist. “The dying world of 1925 was without faith, hope, character,” he later explained. “Only in Communism had I found any practical answer at all to the crisis, and the will to make that answer work. If it was the outrage, it was also the hope of the world.”

Home on P Street. At first, Chambers did little but talk about Communism in party meetings and write for the Daily Worker and the New Masses. One day, while covering a textile strike in Passaic, he watched a slender girl in a brown beret lead a charge against a police line while a cop yelled: “Get that bitch in the brown beret.” Chambers later learned that the girl was a pacifist named Esther Shemitz. They were married in 1931. Four years later, the Communist Party ordered Chambers to Washington as a member of the Fourth Section of the Soviet Military Intelligence.

As Chambers later told his story, he soon met Communist Alger Hiss and his wife, and the two men began a friendship as close “as a man ever makes in his life.” At one point the Chamberses even shared a house with the Hisses on P Street. In 1936, on party orders, Hiss began feeding classified material to Chambers. “He would bring home a briefcase containing documents from the State Department,” explained Chambers. “I would then take the documents to Baltimore to be photographed, returning them to Alger Hiss late the same night or the next morning.”

Go Jump. In 1938 Chambers quit the party because, he explained, his Communist faith in mankind had been replaced by a religious faith in God as the only force that could reform society. Ever the careful conspirator hedging against the future, Chambers gathered together documents, memos in Hiss’s handwriting and microfilm, and gave them to his wife’s nephew for safekeeping. Then he and his family fled in terror from Washington and the Communist Party. In 1939, moved by the Russo-German pact that opened the floodgates of World War II, Chambers disclosed the existence of his old spy ring to Adolf A. Berle Jr., then in charge of State Department security. In Witness, Chambers reports that Berle hustled the information to Franklin Roosevelt, who told him to “go jump in a lake.”

In 1939 Chambers also joined TIME as a book reviewer, rose steadily to the post of senior editor, directed the foreign news and books sections, and wrote numerous cover stories on divergent personalities ranging from Marian Anderson to Reinhold Niebuhr to Albert Einstein. A man who loved self-dramatization, Chambers attracted a group of fiercely loyal friends with his nonconformist personality, his brilliant — though often high-flown — writing style, the surprising spread of his scholarship, and, more important, his apocalyptic view of the world, which saw all mankind as threatened by moral decay.

In particular, ex-Communist Chambers saw the threat of Communism clearly at a time when it was fashionable to talk of the Russians as nothing more than earnest Socialists. As early as March 5, 1945, hard on the heels of the Yalta Conference, TIME published a prophetic “political fairy tale” by Chambers that was called “The Ghosts on the Roof,” in which he accurately predicted a ruthless, imperialistic Russia about to launch an offensive to conquer the world. Chambers’ concern with evil could also take other forms. In a fanciful and humorous article for LIFE, Chambers pictured the Devil as a sort of cosmic underground agent—an embodiment of evil in disguise.

Howling Whirlwind. At that time, confessed, contrite ex-Communists were no rarity in the U.S. But Chambers was something else—a former Communist spy —and his inside knowledge of the party’s machinations drove him on. Public revelation of Chambers’ past broke almost by chance: in 1948 he was called before the House Un-American Activities Committee after investigators kept stumbling across his name in the statements of other wit nesses. Chambers testified freely that Alger Hiss had been a Communist, but said nothing at first about his past involvement in espionage. As the whirlwind began to howl over the Hiss Case, Chambers resigned from TIME in December 1948.

Hiss’s flat denial that he had ever known Chambers began the long series of dramatic hearings and trials that could hardly have been better cast by Hollywood. Chambers, the emotional brooder, who claimed among his friends a New Orleans whore named One-Eyed Annie, v. Hiss, the cool, well-bred Harvard Law School graduate who had been secretary to Oliver Wendell Holmes Jr. In the famed “confrontation scene” in Room 1400 of Manhattan’s Commodore Hotel, Hiss peered at Chambers’ teeth as though examining a horse, listened to his accuser’s low-pitched voice, and admitted recognizing the man—but only as a freelance writer named George Crosley whom he had briefly befriended in the ’30’s.

When Hiss counterattacked with a libel suit, Chambers finally introduced the charge of espionage, and supported his case with the nearly forgotten documents that he retrieved from his wife’s nephew, who had stored them inside an unused dumb-waiter shaft. But even then, Chambers did not produce the microfilm—later he explained that he was afraid it might contain material that would damage other people. With characteristic melodrama, Chambers hid the film roll in a hollowed-out pumpkin in a field on his Maryland farm, surrendered it only when he became convinced that a committee counsel suspected him of withholding evidence. Discouraged by the “indifference” of the world, Chambers later said he had tried to kill himself during the trials. But even his suicide attempt was bizarre: he sniffed the fumes of a cyanide compound and ended up with only a throbbing headache.

Last Judgments. The first Hiss trial ended in a hung jury. On Jan. 25, 1951, the second trial sentenced Hiss to jail for five years for committing perjury when he denied passing documents to Chambers. Still protesting his innocence, Hiss was freed in November 1954, landed a job at $100 a week with a Manhattan manufacturer of women’s combs, and worked his way up to a salary of $20,000 a year. Last year he took a new job as a salesman for stationery and printing firms.

After the trials, Chambers retired to his farm in Maryland and began work on Witness, a book in the classic confessional mold, its fire somewhat dampened by its self-pity—a book that has curiously passed out of conversation. In 1959 Chambers went back to school at Western Maryland College, majored in French, and earned warm praise from the department head: “He was a man capable of real contributions to scholarship.”

Whittaker Chambers’ last word on the Hiss case was printed in 1959 by the right-wing National Review, for which he worked briefly as an editor. Alger Hiss, declared Chambers, had not paid his penalty “except in the shallowest legalistic sense. There is only one possible payment, as I see it, in his case. It is to speak the truth. Hiss’s defiance perpetuates and keeps a fracture in the community as a whole.” 1

2 Responses to Death of a Witness