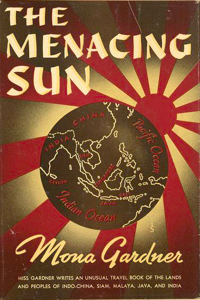 One bomby Sunday afternoon, Mona Gardner sat in a Shanghai park talking Chinese poetry during a Japanese air raid. Outside, Soochow Lane was jampacked with coolies toting vegetables to Shanghai’s International Settlement, and fugitives toting babies, bedding, household goods to safety. Neither vegetables nor babies arrived. Suddenly a light bomber roared a hundred feet overhead, its machine gun working—then two more. Because the simplest horror is the most stunning—automatically “our feet take us” to look at heaped bodies on the road, on the barbed-wire barricades, or those still trying to crawl through.

The shadow of Japanese planes stayed over Mona Gardner on her eleventh-hour reconnaissance of three menaced Eastern empires (French, Dutch and British). Everywhere she found distrust of the Japanese, little evidence of their effective penetration except the inevitable Japanese photographic shop in every strategic railway junction, harbor, mining town.

Unlike most travel books this one really travels, loiters nowhere, observes brightly on the fly, dwells most approvingly on the efforts of Siam’s progressive Government to turn that still independent country into a democracy despite Japanese example and proximity. Fly in the ointment: the Government’s mechanization program is causing serious technological unemployment among elephants.

Britain’s Singapore base looked impregnable, but rangy, Bible-brandishing Major General Dobbie, its commander, refused to say it was, thought it “probably the most peaceful spot on earth.” Almost as open a secret as the 18-inch naval guns dismounted to form land batteries, blabs Traveler Gardner, is the fact that nearly one-sixth of the funds to build the base came from the British sale of opium to addicts, a Government monopoly.

Traveler’s tale: in a Tonkinese sweatshop swollen-eyed children were making “real French lace.” On the wall hung a picture of Rockefeller Center. Much puzzled was the factory owner to learn that Mr. Rockefeller did not live alone in the Center, that there were other inmates. At last he comprehended: “Oh, you mean Monsieur Rockefeller’s concubines.” 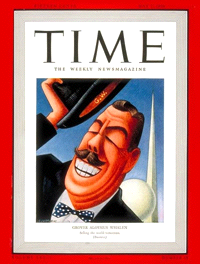