A Republican Looks At His Vote

A Republican Looks At His Vote
National Review – November 22, 1958
By Whittaker Chambers 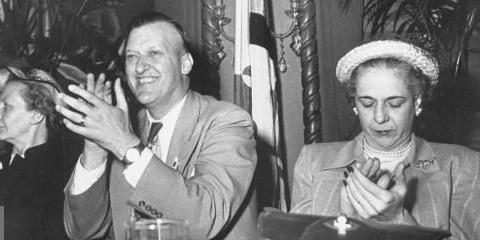 The housewife ahead of us was in the polling booth so long, I thought she could not just be splitting her ballot; she must be emulsifying it. It turned out that she was trapped (voting machines are still something of a novelty with us). When she pushed the lever to the right, the curtains had closed behind her. She could not remember how you open them again. She could not call out (decorum forbade); and she could not get out (panic was taking over). I missed the big moment of her liberation by a bipartisan rescue team. I was watching the voting queue.

Something was noticeable in the faces of the voters — a peculiarly braced sobriety. They seemed to me the faces of people who had, some time before, firmly and finally made up their minds, and were here to do something about it. I had not the slightest doubt as to what most of them meant to do.

Nevertheless, I would vote with my Party. I always vote like a Democrat — that is to say, I always vote a straight Party ticket, but Republican. In that way, I understand myself to be furthering, at least until it becomes simple historical idiocy to do so, certain general propositions about the world — propositions which, on this most recent election day, seemed remarkably remote and unreal.

So voting did not take me a minute. I read only one name (J. Glenn Beall) to locate the Republican line. I snapped down all the Republican keys and left the booth, feeling as if I had thrown my vote into the gutter. No doubt, a man who seeks to act in and on reality, rather than to stand still and watch from some fastidious sideline, must, of necessity and more than once in his life, consciously throw something very precious in a gutter.

I took my little self-disgust, which was only the private face of a larger concern, out into the golden autumn weather that was so ironically like the weather of election day, 1952. Our naive fervors of 1952 appear wildly comical in the disenchanted light of 1958. The discrepancy helps to measure, I think, where six years of “middle of the road” (or twilight sleep) Republicanism have’ brought some of us.

The morning before that other election day I was ill. There was a family hubbub. We all knew what was wrong. But we were also deeply concerned about something else. We supposed that the vote between General Eisenhower and Adlai Stevenson might be close, and we felt that Stevenson’s election would be a disaster. Therefore, every vote counted. Perhaps you must have gone through the school of the Revolution to take voting so seriously as we do; to feel that, in a sense, there is no longer such a thing as a merely American election because every election and its outcome here is an event in the world conflict. Every vote contributes to a cumulative outcome that bears directly on the fate of hundreds of millions of people elsewhere, as well as our own.

So that day in 1952, somebody said: “But you can’t have a heart attack now. You’ve got to vote tomorrow if we have to take you there on a stretcher.” As I walked away from the polling place in that same autumn sunlight, I was struck down. 1

By evening, an ambulance had got me to a hospital, which, by one of those wonderful fumbles that occur, turned out to be the wrong hospital. While everybody tore inside to straighten matters out, my stretcher lay on the ramp; and I could hear voices close by, talking election. A blanket had been pulled (prematurely) over my face. Later, I clawed my way through drugs and made out foggily a small bare room and a little nurse, sitting in one corner. When I stirred, she jumped up and asked if there was anything she could do for me. I said: “Tell me how the election turned out.” She hesitated, disappeared, reappeared almost at once, and said: “A landslide for Eisenhower.” I stopped fighting the sedative and fell most peacefully asleep.

On this last election night, we sat — my wife, my son and I 2 — listening to the remarkable TV coverage. My son, who had just cast his first vote, was clearly exhilarated by the scale of the event he was witness to. He knew, at least in a general way, that he was seeing the incipient third phase of that American social revolution of which the New and Fair Deals had been rocket stages one and two. My wife, as the returns piled up, huddled deeper in her chair. “Gloom” could not possibly cover what she felt. It was rather that she knew she was watching the Republicans epitomize one of the Bible’s most cruelly piercing insights: “To him who hath shall be given. But from him who hath not, even that little which he hath shall be taken away.” I was almost wholly unmoved. I had “discounted” the news. “It is not Fortune that governs the world,” Montesquieu has told us. There are general causes, moral and physical, which operate in every monarchy, raise it, maintain it, or overturn it.”

If this is true of monarchies, it is also true of parties. The Republicans had lost touch with reality in all directions, and in all groupings, until domestic policy resembled irresolution tempered by expediency, and foreign policy more and more resembled something like eccentricity. They had been handed a disaster.

3 Responses to A Republican Looks At His Vote