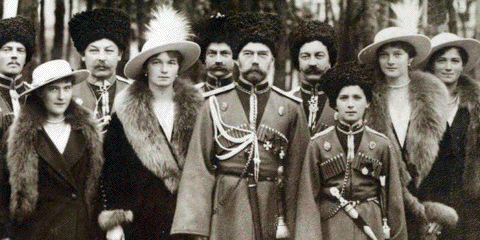 Foreign News: THE GHOSTS ON THE ROOF

The Big Three Conferees dispersed under cover of an all but newsless fog of military security. But here & there was vouchsafed a glimpse — such as Franklin Roosevelt‘s afterdeck chats with Near Eastern potentates (see INTERNATIONAL); here and there a sound, like the short snort from Socialism’s old warhorse, George Bernard Shaw. Snorted Shaw: “[The Yalta Conference is] an impudently incredible fairy tale… Will Stalin declare war on Japan as the price of surrender of the other two over Lublin? Not a word about it. Fairy tales, fairy tales, fairy tales, I for one should, like to know what really passed at Yalta. This will all come out 20 years hence, when Stalin writes his war memoirs… But I shall not then be alive — I shall never know.”

Taking Mr. Shaw’s lead, one of TIME’S editors has written the following political fairy tale. Since fairy tales, like more solemn reports, have their implications and their moral, TIME wishes to make it clear that it admires and respects our heroic ally, recognizes great mutuality of interests between the U.S. and the U.S.S.R.—but that in any argument between Communism and Democracy, TIME is on the side of Democracy.

With the softness of bats, seven ghosts settled down on the flat roof of the Livadia Palace at Yalta. They found someone else already there: a statuesque female figure, crouching, with her eye glued to one of the holes in the roof (it had been through the Russian revolution, three years of civil war, 21 years of Socialist reconstruction, the German invasion and the Russian reoccupation).

“Madam,” said the foremost ghost, an imperious woman with a bullet hole in her head, “what are you doing on our roof?”

Clio, the Muse of History (for it was she), looked up, her finger on her lips. “Shh!” she said, “the Big Three Conference is just ending down there. What with security regulations, censorship and personal secretiveness, the only way I can find out anything these days is by peeping. And who are you?” she asked, squinting slightly (history is sometimes a little shortsighted). “I’ve seen you somewhere before.”

“Madam,” said a male ghost, rising on tiptoe to speak over his wife’s shoulder (he also had a bullet hole in his forehead), “I am Nicholas II, Emperor and Autocrat of All the Russias, Tsar of Moscow, Kiev, Novgorod, Kazan, Astrakhan, of Poland, Siberia and Georgia, Grand Duke of Smolensk, Lithuania, Podolia and Finland, Prince of Estonia, Livonia and Bialystok, Lord of Pskov, Riazan, Yaroslavl, Vitebsk and All the Region of the North, Lord …”

“Nicholas—how nice to see you again!” cried History. “Wherever have you been? And the Tsarina Alix! Your four charming daughters, I presume—gracious, but those bullet holes are disfiguring. And the little hemophiliac — Tsarevich Alexei! Ah, yes, I understand—doomed for a certain term to walk the night. . . . Why, I’ve scarcely given you a thought since that time when the Communists threw your bodies down the mine shaft in Ekaterinburg [now Sverdlovsk]. Whatever brings you here?”

“This, Madam,” said the imperial ghost, “is no strange place to me. It is our former estate of Livadia. Allow me to cite the Intourist‘s Pocket Guide to the Soviet Union: ‘This estate occupies 350 hectares of land, and includes a large park, two palaces and many vineyards. The newer palace [you are standing on its roof], built in 1911 by Krasnov in the style of the Italian Renaissance, is of white Inkerman stone, and contains nearly a hundred rooms.

It has now been changed into a sanatorium for sick peasants, although certain of the rooms have been reserved as a museum… “‘From the alleyways of the Livadian Park…'” Here the Tsarina cut her husband short with a stamp of her ghostly foot.

“Don’t hedge, Nicky,” she cried. “He never could come to the point. He’s trying to cover up the fact that he wanted to eavesdrop on the Big Three Conference.

He doesn’t like to admit it in front of the Tsarevich,” she added in a stage whisper, “but His Imperial Majesty is simply fascinated by Stalin — mais tout a fait epris!” 1

“Stalin! You?” gasped the Muse of History.

“Yes, yes, oh yes,” said the Tsar eagerly, elbowing his wife’s ghost out of the way.

“What statesmanship! What vision! What power! We have known nothing like it since my ancestor, Peter the Great, broke a window into Europe by overrunning the Baltic states in the 18th Century. Stalin has made Russia great again!”

“It all began,” said the Tsarina wearily, “with the German-Russian partition of Poland…”

“I always wanted to take those Poles down a peg,” the Tsar broke in, “but something was always tying my hands.”

“Until then,” the Tsarina went on, “we enjoyed a pleasant, if rather insubstantial, life. We used to haunt the Casino at Monte Carlo. But after the partition of Poland, Nicky insisted on returning to Russia. He began to attend the meetings of the Politburo. The Politburo! Oh, those interminable speeches… Ah, Katorga!” 2

“Couldn’t you stay home?” asked the Muse of History.

“And leave Nicky alone with those sharpers! He never could do anything without me. Besides, I doubt if you know what it’s like to be a ghost: le silence éternel de ces espaces in finis m’effraie — The eternal silence of these infinite spaces terrifies me. Pascal said that, you know. Not bad for a man who had never been liquidated. And then,” the Tsarina added, “Stalin overran Estonia, Latvia, Lithuania.”

“Bessarabia,” cried the Tsar, “was recovered from Rumania.”

“And Northern Bukovina,” cried the Tsarina, “which had never been Russian before.”

“Foreign Minister Saracoglu of Turkey was summoned to Moscow,” said the Tsar, “and taken over the jumps. For a moment I thought we had the Straits.”

“Constantinople,” breathed the Tsarina, “the goal of 200 years of Russian diplomacy.”

“After that,” said the Tsar, “it could not be put off any longer.”

“What?” asked the Muse of History.

“He means a Leninist-Stalinist,” said the Tsarina. “By official definition Leninism-Stalinism is the Marxism of this historical period.”

“Stalinists!” cried the Muse of History.

“I don’t see any reason why you should be so surprised, Madam,” said the Tsarina. “After the way you have favored Communism for the last 27 years, you are little better than a fellow traveler yourself!”

“Of course, we could not formally enter the Party,” the Tsar explained. “There was the question of our former status as exploiters in Russia. Even worse was our present status as ghosts. It violates a basic tenet of Marxism which, of course, does not recognize the supernatural.”

“One might suppose, though,” said the Tsarina, “that since the Party was, so to speak, responsible for making us what we are, the Central Control Commission would stretch a point in our case.” 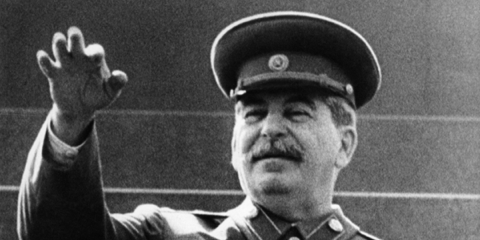 “And now,” said the Tsar, peering through the chink in the roof, “The greatest statesmen in the world have come to Stalin. Who but he would have had the sense of historical fitness to entertain them in my expropriated palace! There he sits, so small, so sure. He is magnificent. Greater than Rurik, greater than Peter! For Peter conquered only in the name of a limited class. But Stalin embodies the international social revolution. That is the mighty, new device of power politics which he has developed for blowing up other countries from within.”

“With it he is conquering Rumania and Bulgaria!” cried the Tsarina.

“Yugoslavia and Hungary!” cried the Tsar.’

“Poland and Finland,” cried the Tsarina.’

“His party comrades are high in the Governments of Italy and France.”

“A fortnight ago they re-entered the Government of Belgium.” “Soon they will control most of Germany.”

“They already control a vast region of China.”

“When Russia enters the war against Japan, we shall take Manchuria, Inner Mongolia, Korea, and settle the old score with Chiang Kai-shek.”

“Through the meddling of the imperialist, Churchill, we have suffered a temporary setback in Greece. But when the proper time comes, we shall sweep through Iran and reach the soft underbelly of Turkey from the south. Turkey and Greece are Britain’s bastions to defend the Middle East…”

“‘You have a world to win,'” cried the Tsarina, “‘You have nothing to lose but your chains.'”

“I must ask you, Madam,” said the Muse of History, “to stop dancing up and down on this roof. These old palaces are scarcely more substantial than you ghosts. I am glad to see that Marxism has had the same psychotherapeutic effect on you as on so many neurotics who join the Communist Party. But your notions about Russia and Stalin are highly abnormal. All right-thinking people now agree that Russia is a mighty friend of democracy. Stalin has become a conservative. In a few hours the whole civilized world will hail the historic decisions just reached beneath your feet as proof that the Soviet Union is prepared to collaborate with her allies in making the world safe for democracy and capitalism. The revolution is over.”

“Grazhdanka! (citizeness),” cried the Tsarina, “you have been reading banned books. Those are the views of the renegade Leon Trotsky.” 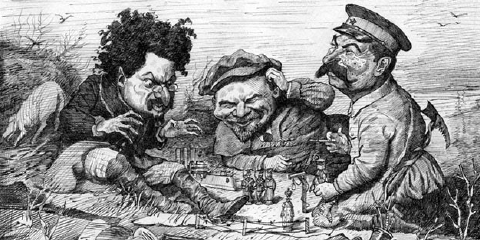 “The Muse cannot help being an intellectual,” said the Tsar generously, “but I do not think that we should charge her with Trotskyism. I must say, though, that for a Muse of History, you seem to have a very slight grasp of the historical dialectic. It is difficult for me to understand how a contemporary of the dialectician, Heraclitus of Ephesus, can still think in the static concepts of 19th-Century liberalism. History, Madam, is not a suburban trolley line which stops to accommodate every housewife with bundles in her arms.”

“I think I liked you better, Nicholas,” said the Muse of History, “when you were only a weakling Tsar. You are becoming a realist.”

“Death,” said the Tsarina, “is a somewhat maturing experience. What Nicky means is that between two systems of society, which embody diametrically opposed moral and political principles, even peace may be only a tactic of struggle.”

“But have not the gentlemen downstairs,” asked History, “just agreed to solve the Polish and Yugoslav questions in a friendly fashion?”

“What makes Stalin great,” said the Tsar, “is that he understands how to adapt revolutionary tactics to the whirling spirals of history as it emerges onto new planes. He has discarded the classical type of proletarian revolution. Nevertheless, he is carrying through basic social revolutions in Rumania, Bulgaria, Yugoslavia, Hungary and Poland. Furthermore, we Marxists believe that in the years of peace Britain and the U.S. will fall apart, due, as we Marxists say, to the inability of capitalism to solve its basic contradiction — that is, its inability to provide continuous work for the masses so that they can buy the goods whose production would provide continuous work for the masses. Britain and America can solve this problem only by becoming Communist states.”

“If that were true, Stalin would be wrong,” said History, “because America and Britain, though they may undergo great changes, will not become Communist states. More is at stake than economic and political systems. Two faiths are at issue. It is just that problem which these gentlemen below are trying to work out in practical terms. But if they fail, I foresee more wars, more revolutions, greater proscriptions, bloodshed and human misery.”

“Well,” said the Tsarina, “if you can foresee all that, why don’t you do something to prevent it?”

The Muse of History drew the Tsarevich to her, for he had become restless. “Poor little bleeder,” she said, stroking his hair, “different only in the organic nature of your disease from so many others who have bled and died. In answer to your question, Madam,” she said, glancing at the Tsarina, “I never permit my foreknowledge to interfere with human folly, if only because I never expect human folly to learn much from history. Besides, I must leave something for my sister, Melpomene, to work on.” 3