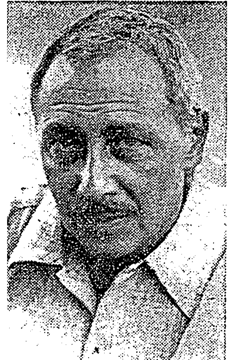 After lunch at a midtown Manhattan hotel, we took the elevator up to the hotel room. There was the usual business of sitting down and getting comfortable in the rough–textured, over–stuffed chairs. When we were settled, Whittaker Chambers, in subtle mimicry of a pompous voice, said: “Mr. Chambers, what is your name?”

In that opening remark he expressed something of the weariness, amusement, fatality and irony he had felt while undergoing countless formal examinations by duly accredited institutions and individuals. It also seemed to mean that he was ready to begin on even a “literary” interview. He waited patiently, as though he were used to waiting.

While he sat silent and looking off into space (Mr. Chambers, as any of his old colleagues will tell you, was always a great fellow for looking out of windows), he appeared as neutral, as devoid of overtone or innuendo as a human being could manage. One knew, from the movie cameras and from Mr. Chambers’ own book what he had been through, but one wouldn’t have known it from Mr. Chambers’ face. It was an excellent mask, hiding absolutely the “life” of the emotions.

He had come up from his Maryland farm. He was not enamored of New York and he casually, though emphatically, expressed his desire to get back. He had always looked like a farmer, a variety of Dutch farmer: short and square and contemplative, with a quality of solitude about him. Now he looked tougher physically, seemed hard rather than pudgy.

From the casual talk, he went on to a point that one heard raised a good deal. The question of Mr. Chambers’ memory. He remembered so many things and he had failed to remember a number of other things.

“That’s always baffled me,” he said in a slow and measured tempo. “There doesn’t seem to be any consistency in the importance of what is remembered. One recalls a shadow on a wall, a gesture, something of no great importance, remembers it for years–and then forgets some extremely important fact like the address of one of the underground photographic laboratories. I suppose only a student of memory could give you the answer and then I wouldn’t be particularly impressed. Memory is like a hot coal–it fades and grows bright again and fades.”

Perhaps more than anyone this side of Messrs. Truman, Churchill and Stalin, 1 Whittaker Chambers had been engaged in politics. What about here and now?

Mr. Chambers smiled wryly. “In the sense that politics is the present tense of history everybody is concerned. Unfortunately, you can’t escape it. There are probably a few things I care to think less about than politics, but today it is very unlikely that a non-political man can exist.

“Though I’m more concerned with spring planting and getting ahead of the rains.”

In his book, “Witness,” Mr. Chambers declared that man must choose between materialism and God. Why was there no other choice?

Mr. Chambers has a way of pausing for a short while before answering a question. He thought for perhaps ten seconds, then proceeded.

“There have been other ages when there were forms of rationalism or skepticism whose roots were scientific. Our time is characterized by an atheism which is not merely passive but which implies an active rejection of God. That rejection finds its voice not only in Marx. It finds an even more effective voice in, for example, Nietzsche.

It is entirely possible that Nietzsche has prepared thousands of minds for the acceptance of communism- minds which have never identified the source of their softening up. In the intellectual sense communism is a manifestation of the modern, secular. materialist mind which begins in fact, if not always consciously, with the rejection of God. This rejection, Marx knew, was a prerequisite for the Communists.”

Still, in spite of what Mr. Chambers said, wasn’t the modern mind individualistic, in essence not at all able to be collectivized?

“I think I’d have to answer,” Mr. Chambers answered, “that the only sound individualism, the only vital individualism, is the individualIsm of the soul, which is tied to God by its nature.”

Mr. Chambers, it had to be confessed, was taking one into a difficult realm. “I find it difficult,” Mr. Chambers said somewhat dryly. “These are things I’m not used to talking out loud about and I’m not even sure they are things a man should talk about. I’m not a solemn cuss. I can’t sit down to one of these pontifical sessions”

“One of the oddities of the Hiss case,” he said, “is that a new writer has appeared on the national scene.

All the years, for nine years, I was wrtting thousands and thousands of words for Time and no one knew of me. What I’d like to do with my literary life is to write a two-volume book. Title: Christendom. Subtitle: From Subiaco to the Air-Raid Shelter. Subiaco, you know, is the cave to which Benedict fled. Volume One: A study of BenedictBenedict and Hildebrand. Volume Two: A study of Nietzsche and Dostoevsky.”

Why was Nietzsche so ominous?

“Nietzsche,” Mr. Chambers said, “is a buried time-bomb in our culture. This Is one of the most peculiar civilizations in history. It’s a civilization that’s broken itself in half. It calls itself Christian and lives under a convention of lip service to the Christian faith. In fact, it’s profoundly non-Christian, even anti-Christian. And the existence of fascism and communism are inevitable manifestations of this fact.”