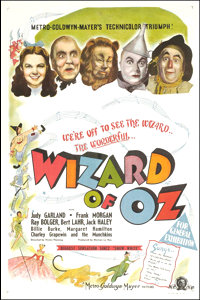 The Wizard of Oz (M. G. M.) should settle an old Hollywood controversy: whether fantasy can be presented on the screen as successfully with human actors as with cartoons. It can. As long as The Wizard of Oz sticks to whimsey and magic, it floats in the same rare atmosphere of enchantment that distinguished Walt Disney’s Snow White and the Seven Dwarfs. When it descends to earth it collapses like a scarecrow in a cloudburst.

Producer Mervyn Le Roy‘s 1939 version of this childhood classic follows with reasonable accuracy L. Frank Baum‘s original story (first published in 1900) that sold over a million copies, his stage adaptation that ran 18 months on Broadway with Fred Stone. 1 Dorothy (Judy Garland) gets blown away in a twister from her home in Kansas, finds herself in the Technicolor land of Oz. Homesick, she goes in search of the Wizard of Oz to ask him how to get back to Kansas. Along the way she meets a Straw Man (Ray Bolger), a Tin Woodman (Jack Haley), a Cowardly Lion (Bert Lahr). They too want to see the Wizard. The Straw Man seeks a brain, the Woodman a heart, the Cowardly Lion, courage.

Secret of the Wizard of Oz is that there is no such person: there is only Professor Marvel (Frank Morgan), a kindly, bungling old carnival seer. But the resourceful Professor has a bit of homely chicanery for each of his applicants, gives them all what they desire. No children’s tale is Hollywood’s Wizard of Oz. Lavish in sets, adult in humor, it is a Broadway spectacle translated into make-believe. Most of its entertainment comes from the polished work (aided by Jack Dawn‘s expert makeup) of seasoned Troupers Lahr, Bolger and Haley.

Metro put $3,000,000 into The Wizard of Oz, left out only the kitchen stove. Its tornado rivals Sam Goldwyn‘s The Hurricane. Its final sequence is as sentimental as Little Women. Its Singer Midgets, most publicized of all the picture’s cast, go through their paces with the bored, sophisticated air of slightly evil children. 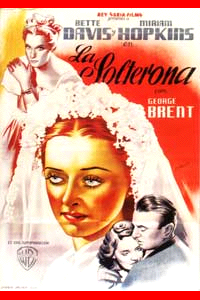 The Old Maid (Warner Bros.) is a drama of anonymous mother love, circa 1861-80, outwardly as dated and dusty as a daguerreotype. To bring Edith Wharton‘s old-fashioned story to life on Broadway four years ago required the highly finished services of Actresses Judith Anderson and Helen Menken, oldtime Playwright Zoë Akins. To make it live on the screen, Warner Bros, teamed their pop-eyed Bernhardt, Bette Davis, with an equally fiery filly from off the home lot, honey-haired Miriam Hopkins. The result flounces its skirts a little more boldly than the stage show but, like it, is hardly more than the sum total of two good, sometimes brilliant, performances.

When Delia Lovell (Miriam Hopkins) tires of waiting for dashing Clem Spender (George Brent) and goes to the altar with a member of the stuffy but dependable Ralston family, she sends Cousin Charlotte (Bette Davis) to break the news to Clem. Delia, who does not suspect that Charlotte also loves Clem, is enraged to discover it, vindictively prevents Charlotte and Clem’s baby from seeking refuge in the Ralston clan after Clem is killed in the Civil War. Instead Delia takes in Charlotte and her baby herself, lavishes affection on Clem’s child, while Charlotte grows through the years into an embittered, bombazined old maid. Because Delia can do everything, Charlotte nothing, for her, Daughter Tina’s unconscious cruelty to her real mother makes the old maid’s refuge a house of hate so terrible that Delia, not a bad sort under her selfishness, finally tries to tear it down.

Though the musty setting of The Old Maid is enough to make anyone susceptible to historical hay fever squirm, few will be unimpressed by the skill with which Director Edmund Goulding manages his spirited costars. Instead of trying to divide the fat bits between them, he so deals out their histrionic diet that they banquet as did Jack Sprat and his wife, cooperatively. 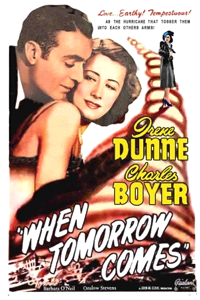 When Tomorrow Comes (Universal) is like a salty story washed out before the end. Its first sequences show Helen Smith (Irene Dunne) helping to organize a strike among her fellow waitresses at Karb’s Restaurant, making a stump speech on the sisterhood of the working class. But “Solidarity Forever” has scarcely died on Helen’s lips and she has yet to join the picket line when she meets a French concert pianist named Philip André Pierre Chegal (Charles Boyer). Next thing she and the audience know, they have been whisked off for a hurricane-tossed Long Island weekend, bogged in a set of problems which cinemaddicts will not find notable for novelty.

Hollywood ribbers had great fun with the title When Tomorrow Comes. Produced and directed by deliberate oldtimer John M. Stahl (Back Street, Imitation of Life), whose method is to take scenes over and over until they suit him, the picture made so much trouble that thin Producer Stahl lost 19 lbs. The circumstance that his picture (which daringly speaks the dread initials C. I. 0. and A. F. of L.) came pat on the cinema industry’s own realistic labor crisis last week was not calculated to make him gain it back. 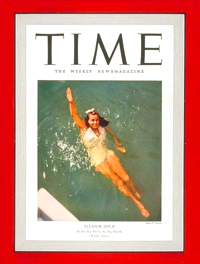