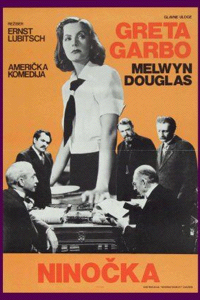 Ninotchka (Metro-Goldwyn-Mayer) reveals the moral, political and sartorial bankruptcy that ensues when a female Bolshevik is exposed to the bourgeois perils of running water, Melvyn Douglas and Paris. Unlike most pictures about Russian Reds, this one is neither crude clowning nor crude prejudice, but a literate and knowingly directed satire which lands many a shrewd crack about phony Five Year Plans, collective farms, Communist jargon and pseudo-scientific gab where it will do the most good—on the funny bone.

During one of those shortages of cash that seem to be chronic in the planned economy, Moscow sends Comrades Buljanoff, Iranoff and Kopalski to Paris to sell confiscated jewels. Though at first they ask, “What would Comrade Lenin say?” about stopping at a swank hotel, the answer soon comes clear: “Comrade Lenin would say, ‘The prestige of the workers must be upheld.’ We cannot go against Comrade Lenin.” But they hastily order “the smallest, dirtiest room in the hotel” when Moscow sends Ninotchka (Greta Garbo) to check up. She is an unsmiling young Russian, with a delightful Swedish accent, who announces that love is a chemical reaction, wants to know at once how much steel the Eiffel Tower contains. At Count Leon’s (Melvyn Douglas) smart bachelor apartment, Ninotchka shocks his staid old butler by asking, “Does he beat you?” and by urging that all wealth be shared equally. As the butler indignantly refuses to share his lifetime savings with his bankrupt employer, she says: “Run along to bed, little father.” When the Count makes love to her while a traffic cop is tooting his whistle, grimly scientific Ninotchka asks: “What is the interval between his whistles?” Her disintegration begins when she discards her semimilitary outfit, buys the most becoming hat she can find, which looks like a horse’s nose bag inverted.

Though the comedy becomes somewhat chilled when the comrades return to Moscow, there are such inspirations as a parade on the Red Square with marchers stolidly carrying hundreds of identical pictures of Stalin. There are scenes in Ninotchka’s small apartment whose limited lebensraum she shares with a girl cellist, a beefy Russian streetcar conductress of the kind Poet e. e. cummings called “non-men,” and a dark, dumpy little man who plods silently in & out—”You never know whether he is going to the washroom or the secret police.”

Garbo, who plays her first full-length comedy with iron, Bolshevik disregard for glamor, in a khaki uniform and middie blouse, succeeds in the difficult task of making her tight-lipped fanaticism funny without making it ridiculous. Even her change of heart is winning and plausible. But why she should change under the impact of Melvyn Douglas is one of those things even the genius of Karl Marx could not explain. 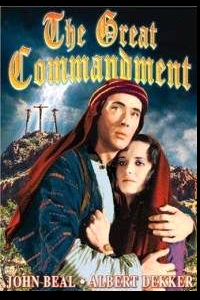 The Great Commandment (Cathedral Films), as sombre as a pogrom and sometimes as bloodcurdling, tells the story of a Jewish revolt against the Romans in 30 A.D. After treating the audience to a pretty thorough study of oppression at its Roman worst, the picture knuckles down to entertaining. Joel (wistful, youthful John Beal) is leader of the Zealots, a Jewish revolutionary society. He has three problems: i) to defeat the Romans; 2) to win languid Tamar (Marjorie Cooley) who seems a little puzzled by all the excitement; 3) to convince his father, Rabbi Lamech (Maurice Moscovich), that it is better to free the Jews than to read the Talmud. The arrival of Jesus of Nazareth solves all these problems by teaching him a higher law than the sword.

Jesus is represented only by a deep, mellifluent voice, speaking parables in Biblical language. It is His disembodied Voice, trailing across the countryside, followed by His disciples, preaching the gospel and working miracles, that gives The ‘Great Commandment its nerve-tingling, eerie power. Good shot: the faces of unbelievers changing from scorn to incredulity as Jesus tells the story of the Good Samaritan (whom they regard as an Englishman does a Liverpool Irishman) who did not pass by on the other side.

In Red Wing, Minn., on the sweetgrass prairie 60 miles from Minneapolis, there grew up the son of a wholesale grocer who was the victim of two apparently irreconcilable ambitions—to be a minister and to make moving pictures. His name was James Friedrich. For two years at the University of Minnesota young Friedrich was a 16 mm. movie bug, ran the Bell & Howell camera supply agency. Still resolved to be a minister, he transferred to the Protestant Episcopal Theological Seminary at Alexandria, Va. There pious, cinemad James Friedrich set a precedent by writing his doctor’s thesis (on the life of St. Paul) in the form of a movie script. He got his degree.

“It was a pretty amateur effort,” says he, but it fired him with the idea of combining his two passions. At Cincinnati’s Graduate School of Applied Religion he toyed with the idea of religious documentary films, dropped it and in 1937 went the whole way to Hollywood.

But it takes the things of this world to make even a religious picture. From his father, James Friedrich inherited about $200,000. In Hollywood he got himself a job as an assistant rector, rented two rooms at Selznick International Studios and hung out a sign reading: Cathedral Films. Author Dana Burnet supplied a script with plenty of entertainment value and with preaching carefully soft-pedaled. Once Friedrich met hard-bitten James Thompson Coyle, veteran Hollywood Jack-of-all-trades, and sold him on the idea that a religious picture could make money, Cathedral Films was ready to produce The Great Commandment in 17 days with a budget of $150,000.

Last week, with Paramount, RKO and MGM, dickering for his picture, the Rev. Mr. Friedrich, movie producer and parson too, looked around for a typically U. S. town to test audience reaction to the film. He chose Joplin, Mo., birthplace of Cinemactor Beal.