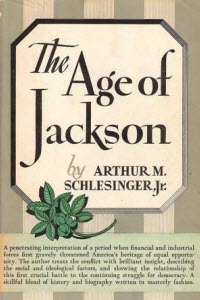 Once upon a time, when the Yewnited States was just a little shaver among the nations, but already very spoiled along the literate Eastern fringes, there lived younder in Tennessee a lovable old man with a tongue like a rat-tailed file and a face so hard they called him Old Hickory. He was a great hero. In the War of 1812, he licked the British in the Battle of Noo Orleens (some time after peace had been made). Everybody loved him because he had come up the hard way from nothing to a plantation and owning slaves, but he never forgot the COMMON MAN. Sitting on his plantation porch of an evening, he would say: “I still love the COMMON MAN,” and, with a jet of tobacco juice slanchwise between the Ionic columns, would drown a doodlebug at five yards. So they called him the SAGE of The Hermitage (his plantation).

Now, in the big city of Philadelphia, across the mountains, lived a very wicked man. His name was Nicholas Biddle. He was president of the Yewnited States Bank, which was a wily scheme to get hard money away from the COMMON MAN and give him scraps of paper in exchange. This Biddle was a bad actor. He did not eat with his knife and he foregathered with cronies who drank soup in silence so they could hear each other plot against the COMMON MAN. They were called Federalists. They held that some of the COMMON MEN could be hoodwinked all of the time, and that that was enough. They plotted to keep the COMMON MAN from being hoodwinked by anybody else.

One day Old Hickory got so mad he roared: “My name is Andrew Jackson, fresh from the backwoods, half-horse, half-alligator, a little touched with snapping turtle. I can wade the Mississippi, leap the Ohio, ride a streak of lightning, slip without a scratch down the honey locust, whip my weight in wildcats, hug a bear too close for comfort and eat anybody opposed to the COMMON MAN! Come on, boys, let’s get Nicholas Biddle.”

So all the peckerwoods and rednecks and the big planters from the South (who did not like the tariff) and the farmers from the West (who did not like the Bank), they voted Old Hickory to be the seventh President of the Yewnited States. Then they all marched to Washington. Old Hickory kicked Nicholas Biddle higher than the day before yesterday and the Yewnited States Bank higher than the day before next. Then they all went to the White House for free grog and climbed over the fancy chairs with muddy boots. Everybody got jobs with the Government because, as Old Hickory said: “To the victors belong the spoils!” And everybody agreed that it was democracy at work.

Everybody, that is, except the Federalists, who were right pokey about it and thought that democracy could be made to work quite well without the cowhide boots, and that the great thing about democracy was that it gave the COMMON MAN the chance not to be common.

So runs the Jackson legend. Now Arthur M. Schlesinger Jr., son of the professor of American History at Harvard University, in a brilliant justification of the New Deal disguised as a history of the age of Jackson, says that the legend and the facts do not jibe at all. In 577 pages, he implies that the “Jacksonian Revolution,” which finally drove the Federalists out, and brought entirely new social forces into political power in the U.S., was just the Roosevelt revolution in embryo. The social forces that broke the Federalists and the power of the “mercantile classes” and made Old Hickory President were the same kind of forces that made the New Deal powerful. (The COMMON MAN reversed his field when Old Hickory bequeathed him an executive successor in the form of Martin Van Buren, the Harry S. Truman of the time.)

In a series of crisp biographical sketches, Schlesinger resuscitates the men around Jackson, some of them members of his official family, some of them members of the unofficial “Kitchen Cabinet” which sometimes played a more effective role in governing the country than the cabinet officers. Many of these men have been forgotten. There was Thomas Hart Benton (“He had a giant conviction that he and the people were one. ‘Nobody opposes Benton,’ he would roar, pronouncing it ‘Bane-ton,’ ‘but a few blackjack prairie lawyers; these are the only opponents of Benton. Benton and the people are one and the same, sir; synonymous terms, sir; synonymous terms, sir.’ “).

There was C. C. Cambreleng, “the crony of Van Buren”; Roger B. (“Dred Scott”) Taney, “the spearhead of radicalism in the new cabinet” (“a tall sharp-faced man, with irregular yellow teeth, generally clamped on a long black cigar, he made a bad first impression,” but his reasoning and his conviction won him friends). There was Amos Kendall, the Harry Hopkins of the age (“his chronic bad health may have created a special bond with the President, and Jackson soon began to rely on Kendall for aid in writing his messages. . . . Gradually, Kendall’s supreme skill in interpreting, verbalizing and documenting Jackson’s intuitions made him indispensable”).

There was John Taylor of Caroline, farmer, Jeffersonian theorist and author of An Enquiry into the Principles and Policy of the Government of the United States, which John Randolph considered “a monument of the force and weakness of the human mind,” and Mr. Schlesinger considers great political writing.

It is Author Schlesinger’s novel contention that the orthodox schoolmen have been wrong about Jackson’s popular support. Says Schlesinger: The enduring basis of Jackson’s strength was not the intermittent radicalism of the West and South, but the chronic radicalism of the Eastern working classes. It was alliance with them which enabled Jacksonism to advance beyond Jeffersonism, to the Jeffersonian insistence on political freedom, Jacksonism added the insistence on economic freedom—the catchword of the New Deal.

“The Jacksonians believed that there was a deep-rooted conflict in society between the ‘producing’ and ‘nonproducing’ classes — the farmers and laborers on the one hand, and the business community on the other. The business community was considered to hold high cards in this conflict through its network of banks and corporations, its control of education and the press, above all, its power over the state …”

Democracy, Schlesinger holds, is a condition of tension, in which neither side has a permanent advantage. This theory of tension distinguishes Historian Schlesinger’s from Revolutionist Karl Marx‘s theory of class struggle, which ends each bout in a sullen victory for one side or the other, or “in the common ruin of the contending classes.”

The history of the next few decades will tell which theorist is right.