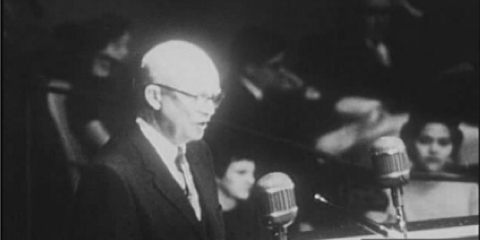 With millions of other TV-viewers, I watched the President give his UN address on Arab slum clearance; a well-organized speech, and rather gallantly delivered, besides — only, almost wholly irrelevant. The rate at which things are moving is glimpsed in the fact that nothing whatever had been settled about the crisis in the Middle East, before we put it largely out of mind in favor of the current crisis in the Far East, which had overtaken it. Later, Mr. Eisenhower gave us his views on that one.

Groping for the sense behind the President’s words, I came up with nothing better than: didn’t say he would, didn’t say he wouldn’t. Since the speech was beamed to Moscow and Peking, quite as much as to you and me, this, I presume, was exactly the effect intended: keep them guessing. Alas, they are rather good at guessing. Besides, they know the secret in the daisy, the secret in each crisis. Seldom has a secret been less of a riddle. The rhetorical issues in each crisis are almost never the point. Neither the freedom of the Lebanon nor the title deeds to Quemoy is the point. In each crisis, there is only one point to be settled, and it is always the same point: whether or not the West has resolved at last to stop the Communist advance in the only way it can be stopped: by a decision to make war at need.

Of course such war, at this stage of stalemated history, could only be in the nature of an adventure. Doubtless there are those, on both sides, who are impatient to end the intolerable stalemate by risking the adventure. But, since the consequences to both sides are foreseeably apocalyptic, it seems unlikely that the adventurers will have their way. For nobody needs to guess about the thermonuclear consequences.

It is this that leaves the veteran guessers in Moscow and Peking free to guess (like the President)that there will be no world war over Quemoy. Hence the wrenching pathos which is what I, for one, chiefly carried away from both the President’s addresses, namely: a sense that he and his advisers, doing the very best they know how, could still, in effect, do so little. Never imagine that their plausible critics could do more. Those critics might do it all somewhat differently. That is to say — unless they, too, had taken firmly the frightful decision for war at need — they might conduct the alternative retreat more gracefully, trippingly, wittily in the style of the Adlai — an adlib. It is unlikely that they could accomplish anything more effective in a situation whose extremity is defined by its two alternatives: fight or retreat. That is the only secret in the daisy.

If this is true, but there is to be no war – what then? Mercifully, I am not required to guess.

But I should like to stick my neck out interspatially by guessing about something else, lest, one of these months, we suffer another Sputnik-type alarm at the expectable. I should like to guess that the Russians are fairly content to leave to us the vast cost and effort of shooting the moon. Instead, I should guess that the Russians are investing every available resource of mind, material, money, in getting men into space and back again, alive. Like the rest of us, they have heard that whoever first learns to commute to and from space, and to man something or other up there, will presumably control space, and much else besides.

War on the scale of the worlds, annihilation, space and its command, a visible nearness to the brink of unheard-of disaster. We know that it is scarcely farther away than an initiating impulse in the whorls of a brain responsible for ordering a responsible hand to push a button, and so set in motion the marvelous mechanisms for inflicting or resisting chaos. We are continually told about it. We listen, and in part believe. In larger part, the reality passes us by; it passes our imagination. Too big. Too big truly to grasp.

One day, a meaning of it comes home in a form we can grasp – the distress of a single human creature and his reflections on it. A friend writes: “Up at 5 a.m. today to get some hot coffee into my son and drive him to his draft board in time (for the Army vehicle which was picking up the quota). If the time should ever come (as I pray it never will), when you have to take this journey with your son, I think you will consider with a quite new urgency what Jaspers meant in writing: Quietly, something enormous has happened in the reality of Western man: a destruction of all authority, a radical disillusionment in an over-confident reason, and a dissolution of bonds that makes anything, absolutely anything, seem possible… Philosophizing, to be authentic, must grow out of our new reality, and there take its stand.”

“Quietly, something enormous has happened in the reality of Western man.” I am constantly baffled because so few seem to grasp this enormity of our situation, which is defined by the certainty that there is no way out of it that can possibly be simple, easy, familiar, usual, in terms of anything we have known before. Whether the resolution of our total crisis is to be unimaginably violent, or what, at this moment, seems even less imaginable, a massive peaceful settlement, what comes next can only be tremendous. We are visibly at a point of change, a turning point, which has not its like in history. Henceforth, peace implies consequences almost as staggering as war.

One Response to Some Untimely Jottings