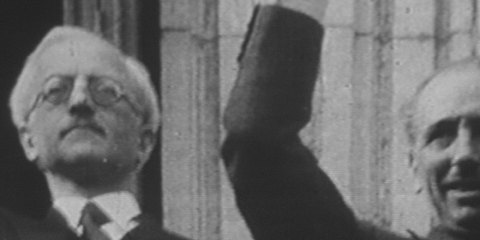 A watchful reader notes that I closed a recent piece in this magazine by saying: “We have visibly reached a point of change, a turning-point, which has not its like in history.” He also recalls that I used the same phrase several years ago, in an article (about the 20th Congress of the Soviet Communist Party) in Life magazine. “You rang several changes on it then,” he writes. “Does this phrase have some mystic meaning for you, not known to the rest of us? Is it an incantation? Or is it just that you can’t think of anything else to say?”

I suppose that, in a way, it is an incantation, in the sense that it is meant to evoke something — to be a reminder of something though it is never identified — so that readers, coming on it, may feel a little uneasily: That theme again. I have used it deliberately somewhat like that leitmotif which, now and again, stirs under the dense overcast of Wagnerian sounds to remind us that Fate is still at work.

Though we late-comers are scarcely any longer aware of it, one of Christianity’s tidings of great joy was that it had banished Fate from the world. No longer was a man’s Fate fixed and shaped irreversibly by the stars he happened to be born under, so that his life was predestined to be just so, and not otherwise. The moving finger writ, and all his piety and wit could not cancel out one fated circumstance; so that the noblest posture, for slave (Epictetus) and Emperor (Marcus Aurelius) alike, was a stoic resignation. This was the glad tidings — that Fate was overthrown. The hopeless entrapping ring was broken. Man himself could break it, since every individual soul was divinely precious. Armed with this knowledge, man was free at last, first of all from Fate; then free to make of his destiny what he would and could.

In our century, Fate has returned to the world, and possessed the minds of millions who, submitting to its thrall or acting in its name, seek to extend its dominion. This time, Fate has returned in the guise of History. It may be put (very loosely) like this: History is shaped by the action and interaction of great impersonal forces. Men merely enact it. If they act, prevailingly, in the direction of the main lines of force, its momentum carries them along to success; and we are invited to call such men great, wise, and even good. Those who, out of folly, ignorance or stubborn principle, resist the main lines of force, History exterminates mercilessly. They are in the way; and what does a ragweed, for example, have to do with mercy, when a million pollen grains may be wasted to bring a single seed to fruition? The process is impersonal.

There is grandeur in this concept. It is idle to fancy that we can dismiss it with a snap of the fingers or by snapping shut our minds against it. Nor can we easily frown it down by a stately assurance which, very often, is not truly assured. For we see the main design and workings of the concept enacted on all sides of us, in Nature. Why should Man be the exception? Prove it. Nor is this concept at home only in the Communist East. It exists widely throughout the West, nameless, or under. various distracting names, as a floating ambience, breeding a climate.

Thus, at a basic point of issue, the mind of the West is divided against itself; and this basic division is repeatedly rubbed raw as it is touched by each of our recurrent crises, at all levels. For this is the basic cleavage. It is this which, behind the teeming crises, the overtoppling threat of great disaster, not only in the form of bombs and missiles, gives to our mood a hovering sense of finality that no amount of rationalizing quite dispels. It is this which sometimes makes us feel as if there were occurring in the general mind of man something like a molecular rearrangement of particles; that man is about to become something other than he is, if he does not perish in the process. Behind all events and all appearances, this choice is presented: Fate or Freedom. And it is presented as an issue that must be decided — now. It is this which gives us that sense of living through a time which has not its like in history.

The phrase is not mine. It was spoken in our own lifetime, by a particular, fateful man in the spin of this century’s moment of decision. I am assuming that the Russian Revolution was the decisive action of the century’s first half, in the sense that, directly or indirectly, it affected everything of importance that came after. I should like to identify the man and the moment as I felt their impact close to the time when both converged. What follows is from an unpublished manuscript:

I was thirteen years old when Sir Edward Grey, then Britain’s Foreign Secretary, stared into the dusk of the day in 1914 when England declared war on Germany, and summed up for his age: “The lights are going out all over Europe tonight. They will not be lit again in our time.”

I was sixteen when, on an October day in Petrograd — the rain-wind beating in from the Finland Gulf — Antonov-Avseenko, at the head of the Red Guard, rushed the Winter Palace. Therewith, all power in the former empire of the Czars fell to Communism. In the Petrograd Soviet Leon Trotsky rose to report the revolutionary victory. As if (for once) at a loss for language, he stared for a moment through his glasses at the mass of capped, greatcoated, high-booted men who stared back at him. Then he found the words equal to the event: “Comrades of the Soviet of Workers’ and Soldiers’ Deputies, we have this day begun an experiment that has not its like in history.”

This is where the phrase comes from. This is the formal announcement that Fate had returned to the world in the guise of History. This is why I use the fateful phrase, from time to time, to remind others, without expressly laboring it, of a choice that it will surely be granted to each of us to make in this time, first in our mind, then in our acts: Fate or Freedom.

One Response to A Reminder