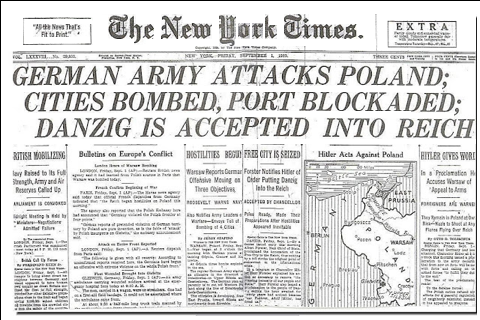 Seventy-five years ago today, in the early hours of September 1, 1939, Adolf Hitler‘s Wehrmacht began its Blitzkrieg on Poland when the dreadnought battleship SMS Schleswig-Holstein fired on Westerplatte in the Free City of Danzig. The invasion of Poland had begun, inaugurating World War II. 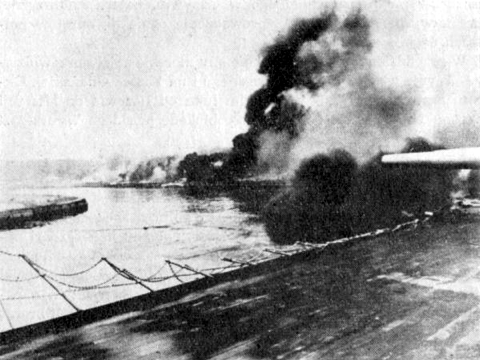 The Nazis had marked Danzig (modern Gdansk) for their Schwerpunkt (break-through point). Danzig fit military criteria for such an attack, according to principles published in 1937 by Nazi general Heinz Guderian in Achtung – Panzer!, thanks to Germany’s flanking of the Polish Corridor, in which it lay. It also fit Hitler’s long-time plans for Drang Nach Osten and ideological need for German Lebensraum (the Nazi version of Ostsiedlung).

Like most of his generation and leftist experience, Whittaker Chambers saw Poland as a continuation of Spain:

The Spanish Civil War had ended. That is to say, the opening campaign of World War II had ended. The great interventionists in Spain — Fascism (in its German and Italian forms) and Fascism (in its Soviet guise) — were free to maneuver for new positions in other fields. Spain had disclosed the pattern of the war to come. Whatever the free nations meant to fight for, whatever the millions meant to die for, in reality, World War II, like the Spanish Civil War, would be fought to decide which of the great fascist systems — the Axis or Communism — was to survive and control Europe. In the end, the superiority of the Communist system was indicated by the fact that it was able to use the free nations to carry out its purposes, as indispensable allies in war, whose vital interests could easily be defeated in peace. 1

He had been tracking such developments for years — for example, in a 1941 TIME article, he had written:

The rise of fascism completed the intellectuals’ conversion. Frightened by the fate of Germany’s intelligentsia, delighted by the chance to strike at Naziism in Spain, intellectuals lent their names, prestige, money, often militant support to dozens of committees (many of which they now realize were phony) to fight fascism and aid loyalist Spain. 2 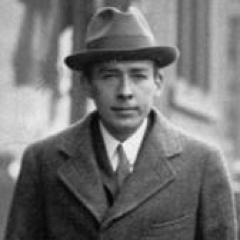 The accumulated experience led Chambers to take drastic action and report about Communist infiltration directly to the U.S. Government as high as he could reach: Adolf Berle. It would be the first and only time he would take such action. Thereafter, disappointed, he would await (and come to dread) federal questions, which he would answer less and less openly. The Nazi invasion of Poland of September 1, 1939, for Chambers led more or less directly to his HUAC testimony on August 3, 1948 — nine years later.