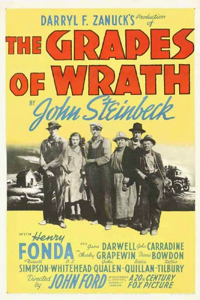 The Grapes of Wrath (20th Century-Fox). It will be a red rag to bull-mad Californians who may or may not boycott it. Others, who were merely annoyed at the exaggerations, propaganda and phony pathos of John Steinbeck‘s best selling novel, may just stay away. Pinkos who did not bat an eye when the Soviet Government exterminated 3,000,000 peasants by famine, will go for a good cry over the hardships of the Okies. But people who go to pictures for the sake of seeing pictures will see a great one. For The Grapes of Wrath is possibly the best picture ever made from a so-so book. It is certainly the best picture Darryl F. Zanuck has produced or Nunnally Johnson scripted. It would be the best John Ford had directed if he had not already made The Informer.

Part of the credit belongs accidentally to censorship and the camera. Censorship excised John Steinbeck’s well-meant excesses. Camera-craft purged the picture of the editorial rash that blotched the Steinbeck book. Cleared of excrescences, the residue is the great human story which made thousands of people, who damned the novel’s phony conclusions, read it. It is the saga of an authentic U. S. farming family who lose their land. They wander, they suffer, but they endure. They are never quite defeated, and their survival is itself a triumph.

Because the picture deals with everyday U. S. types, casting was all-important. Key character was Ma Joad (Jane Darwell). If she was wrong, the picture could never be in focus. She is magnificent. Russell Simpson is owlish Pa Joad. He is also a million men who plough, seed and harvest U. S. farms. Only star used was Henry Fonda (Tom Joad). For him the part was a throwback to one of his best roles, the young lineman in Slim. Others like John Carradine, Charley Grapewin, Zeffie Tilbury, John Qualen, Eddie Quillan, Frank Darien have played minor roles in pictures for years and played them well. Each was as essential to The Grapes of Wrath as its scores of Okies, filling station men, cops, deputies. And each is right.

The Americans of this second westward trek are still fighting the desert, the mountains, hunger, thirst, death. Tame Indians stand and wonder at them. The Indians these modern pioneers fight are California deputies who resent the invasion of their State as much as earlier red men resented earlier whites. These are in a better position to show resentment.

The old people die on the march. There are great simple moments like the burial of Grandpa (Charley Grapewin). Wisely Nunnally Johnson has retained only the bare bones of dialogue from the novel. So the burial scene is terser, more moving in picture than in book. High point is still Tom Joad’s quiet rebuke when the irreligious Preacher (John Carradine) does not want to speak at the grave: “Ain’t none of our folks ever been buried without a few words.” There is the note Tom Joad writes to bury with the body: “This here is William James Joad, dyed of a stroke, old, old man. His fokes buried him becaws they got no money to pay for funerls. Nobody kilt him. Jus a stroke an he dyed.” John Ford’s touch is everywhere. It is in Tom Joad’s laboriously adding an s to funerl in the burial note. It is in the marvelous pantomime as Ma Joad burns her box of letters and keepsakes before starting west—a silent scene that is broken by two meaningful words: “I’m ready.” It is in the three tense worried faces reflected in the windshield of the jaloppy as the family crosses the weird desert at night. Above all, it is in the ironically recurring song of the mockingbird, heard in the distance as the family first sights California’s orchards.

It is no more important that California deputies kill strikers than that Tom Joad is a killer before the picture begins, kills again before it ends. It is equally unimportant that the Preacher, who has never understood religion, becomes an agitator, or that Tom Joad becomes a fugitive from justice. Ma is the important thing in The Grapes of Wrath, for Ma begins as one thing, ends as another. A bewildered, homeless, heartbroken woman when the picture opens, at its close she is an immovable force, holding the crumbling family together against things she does not even understand, against agitators as well as deputies.

As played by Jane Darwell, Ma is a great tragic character of the screen, even her victory is tragic. She can win it only by losing everything. But faced with hunger, homelessness, death, she sees that none of these was important. Ma is the incarnation of the dignity of human being, and the courage to assert it against odds. 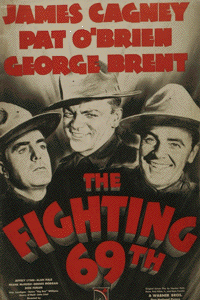 The Fighting 69th (Warner Bros.), a fictionized account of the intimate life and exploits of Manhattan’s famed World War regiment continues, in slightly modified form, Warners’ long time efforts to refine through suffering the character of their ace triggerman, James Cagney. Sometimes the effort has resulted in Mr. Cagney’s death (The Roaring Twenties). Sometimes he survives (Here Comes the Navy). In either case his reward has usually been the love of a pure, high minded girl. As Jerry Plunkett, a Brooklyn braggart, James Cagney is not only a disgrace to his semisavage comrades, but he turns coward under fire. Reclaimed by a well-placed shot and the ministrations of Father Duffy (Pat O’Brien), Jerry dies in battle. But this time valor is its only reward. There is not a girl in The Fighting 69th, luscious Priscilla Lane having been withdrawn at zero hour from the stag cast by what seems a prudent studio decision.

Aficionados who know a first class carnage when they see and hear one ought to like this picture. There is seldom a dull moment.

Others will be willing to take James Cagney’s word for it. Asked during a lull in shooting the picture what was going to happen next, Cinemactor Cagney eyed his questioner, demanded incredulously: “Are you really that interested?”

The Earl of Chicago (Metro-Goldwyn-Mayer). For years Robert Montgomery made out very handsomely as a Hollywood type. To cinemaddicts he was a slickly turned-out young man of the world whose scintillant wisecracks regularly wowed Joan Crawford. But all the while Robert Montgomery wanted to be a gangster. Much against its better judgment his studio at last let him play a sneering homicidal bellhop in Night Must Fall. Cinemactor Montgomery had a high old time murdering Dame May Whitty, and critics thought it was pretty good too. But the U. S. cinemasses, who can spot a phony on the screen as quickly as on the street, stayed away from the box office. They thought Robert Montgomery was not the type. 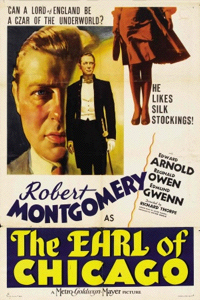 In The Earl of Chicago, persevering Robert Montgomery is at some pains to show them they were wrong. As Silky, a sly, post-Prohibition Chicago gangster, who inherits an ancient and honorable British earldom, young Mr. Montgomery proves that his criminal instincts are sound. His triumph is all the more thumping because, as a movie, The Earl of Chicago never quite knows where it is going. Starting as a comedy in Chicago, it turns into stark drama under the impact of British manners and manors. Silky, once a carefree, moronic young mobster, snapping rubber bands at a pair of shapely legs (their tantalizing owner never steps into the picture), goes to his death (by hanging) in the regalia and with the dignity of a peer of the realm.

Part of the credit for making this somersault admirably smooth instead of ridiculous belongs to Producer Victor Saville (Goodbye, Mr. Chips) and Director Richard Thorpe (Night Must Fall). Part belongs to British Actor Edmund Gwenn for a first-rate performance as the butler who is submissive, not subservient. But most of the entertainment in The Earl of Chicago, and that is plenty, is provided by Robert Montgomery’s transformation of his playboy grin into a fixed moronic stare, his playboy titter into a loony hee-hee, his playboy aplomb into gangster arrogance.

One Response to Cinema: Grapes of Wrath