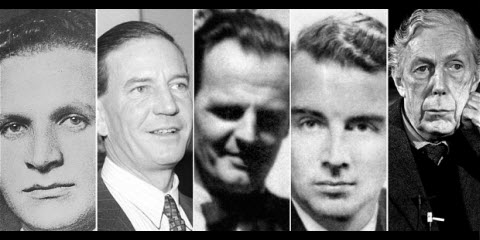 The London Review of Books has published this comment on Inigo Thomas‘s piece, “High Priestess of Anti-Communism“:

The MI5 documents published by the UK’s National Archives last month on Whittaker Chambers/Alger Hiss were indeed of interest.

For me (a grandchild of Whittaker Chambers), it was an earlier document in that collection that caught my attention. It comes from an “R. T. Reed,” dated November 20, 1952, regarding Chambers’s 1952 memoir Witness. Random House had published the book in May 1952. Months ahead of the UK edition published in 1953, Reed’s commentary adds to an impressive list of dispassionate British observations on the Hiss Case.

Reed tones down the American focus on Hiss versus Chambers. He also downplays the Ware Group. Instead, his interest lies in the international character of the Soviet Underground. Thus, Reed mentions Walter Krivitsky early on. (Krivitsky was brief successor to Ignace Reiss, head of the GRU‘s Western European operations.) A footnote mentions “Ulanov,” corrected by pencil as “Ulanovski”: Alexander Ulanovsky was one of Chambers’s first Soviet rezident handlers. Another footnote notes Chambers’s involvement in setting up “an espionage network in England.”

In a situation with few parallels in history, the agents of a foreign power were in a position to do much more than purloin documents. They were in a position to influence the nation’s foreign policy in the interests of the nation’s chief enemy, and not only on exceptional occasions like Yalta (where Hiss’s role, while presumably important, is still ill-defined) or through the Morgenthau Plan for the destruction of Germany (which is generally credited to [Harry Dexter] White), but in what must have been the staggering sum of day-to-day decisions. The power to influence policy had always been the ultimate purpose of the Communist Party’s infiltration. It was much more dangerous, and, as events have proved, much more difficult to detect, than espionage, which beside it is trivial, though the two go hand in hand. (Witness, p. 472)

Reed underscores: “The power to influence policy had always been the ultimate purpose of the Communist Party’s infiltration.”

He concludes at one point: “In the technical sense, the Ware Group was not primarily an espionage group.” Then, again he quotes Chambers: “The real power of the [Ware] Group lay at much higher levels. It was a power to influence, from the most strategic positions, the policies of the United States Government.” (Witness, p. 343)

“The power to influence” — Reed must have had the Cambridge Five in mind. After all, Donald Maclean and Guy Burgess had disappeared only the summer before (1951). Reed mentions, “The following passages might well have been written about this country bearing in mind our own discoveries and beliefs.” (Another document dated April 7, 1951, records an FBI memo about an informant who claimed that “Mclean was in contact with Alger Hiss” twice in October 1946.)

Reed notes that Witness has “a full index at the end of the book which is very useful.” One document considers who might be a “British Communist” mentioned in Witness. One suspect is a Glaswegian named Tom Bell, another a Mancunian named Jim Crossley (shades of Alger Hiss’s “George Crosley”?).

International connections between the US and UK permeate these documents. They reflect the global spy network. While in service, Chambers knew it as the “Soviet Underground.” After he defected, Krivitsky told him it was the Fourth Department of the Red Army or “GRU” (to use its Soviet acronym). One document talks about Chambers’s official recruiter, Max Bedacht, who ordered him to join the Underground. The same mentions John Loomis Sherman, who trained him in Soviet espionage.

Much seems to have missing in the MI5 documents just published. Did MI5 ¬not investigate? One document dated February 15, 1951, discusses Maxim Lieber, a literary agent who worked with Chambers to set up the “espionage network in England” mentioned earlier. It questions whether Lieber’s relationship to “Budberg” (Moura Budberg) extended to anything beyond literary interests.

Was there no more investigation?

In Witness, Chambers talks a length about a branch of Lieber’s literary agency he was to establish in London. Later, he writes, Sherman was to go to London in Chambers’s stead. (By then posted instead to the Ware Group in Washington.) A document cited above mentions that Hiss knew Mclean. Krivitsky and Reiss helped oversee the setting up of the Cambridge Five.

Are we to believe that MI5 did no more to tie Chambers with the Cambridge Five?

One Response to MI5 Papers on Hiss-Chambers Case