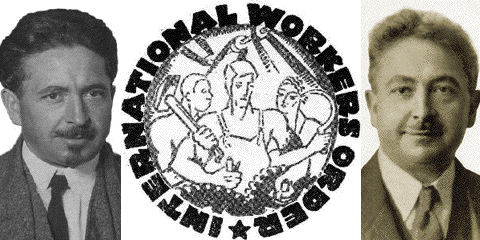 Forty years ago today, Max Bedacht died on July 4, 1972. He was a socialist revolutionary, born in Germany, who helped establish the Communist Party of America. He headed the International Workers Order.

Bedacht is also the person who recruited Whittaker Chambers into the Communist underground, according to Chambers.

In his memoirs, Chambers recalled from the summe of 1932:

One hot June day in 1932, while I was preparing my third issue of the New Masses, I answered the telephone, and an unfamiliar voice said quietly: “This is Comrade Bedacht. I would like to see you right away.”

Bedacht’s office was on the ninth floor of the Workers Center, which, during my absence from the party, had moved from Union Square to 13th Street. I knew of Bedacht only as the fatherly Communist “who had kids to the number of acht,” as a singularly self-effacing member of the Central Committee, and head of the International Workers Order, a Communist-controlled benefit and insurance society. I tried to think of any possible reason why Comrade Bedacht would want to see me. I had no idea that that quiet little man had been for years a permanent link between the Central Committee of the American Communist Party and the Soviet Military Intelligence in the United States.

“They want you to do underground work.” 1

Chambers’ first assignment was to serve as a Verbindungsmensch (“liaison”) between the underground and “the Bank” (the open Communist party) in the person of Bedacht. 2

In the past, Don had been the Verbindungsmensch. He met weekly with Bedacht, sometimes to ask specific favors of the Bank, sometimes to receive information from it. Sometimes there was no business at all. Then Don just chatted with Bedacht. Don met Bedacht by calling him at the Workers Center or the I .W.O. office and summoning him to some prearranged place. Bedacht had no way of reaching Don. Since Bedacht might have important unexpected news to give, the contact was indispensable and must be kept up regularly.

These party folk were unimportant compared to the underground, Sherman told Chambers. The underground has to keep the open party at bay, starting with Bedacht. The first time Chambers went with Sherman to meet, Bedacht complained about the uproar of Chambers’ disappearance from the New Masses. He told them, “Browder is furious.”

Don laughed. “Tell Browder,” he said in the tone of a pasha of four horses tails talking to a rug dealer, “that he is faced with an accomplished fact. There is nothing he can do about it.” 3

Some have sought to discredit the date Chambers gives for his first meeting with Bedacht. Historian Thomas Sakmyster states:

The latest report on Max Bedacht’s comings and goings in 1932 confirms that he was in fact in New York for considerable stretches of time in July, August, and September, 1932… Chambers recalled that this summons from Bedacht came in June. The available documentation shows that it could not have happened in June. How to interpret this?… As a historian I would not immediately conclude that Chambers (or any individual in a similar situation) was lying, that he invented the whole story. After all, many people when trying to remember an event 15 years after it happened, might not get the exact month right, even though the basic thrust of their recollection is accurate. Recall for Chambers was all the more difficult because those who engaged in work for the illegal apparatus were warned not to keep any evidence of their activities, such as diaries, correspondence, etc… So Chambers had no records he could consult before he melodramatically (and rather foolishly) declared that it was specifically a “hot June day” when he met Bedacht. As a historian I would at least consider the possibility that Chambers had simply misremembered. Perhaps the event occurred not in June, but at some other time that summer, in July, August, or September. 4

According to Chambers, Bedacht eventually stepped aside for a new controller: J. Peters. He went to to become general secretary of the IWO during the 1940s. In the mid-1940s, he received a subpoena to appear before the Dies Committee. In 1948, he was expelled from the CPUSA. In 1949, he appeared before HUAC, at which time he admitted to his expulsion but would not discuss the reasons. 5 His memoirs, On the Path of Life, written but unpublished in 1967, appear in part online 6: a full copy is available in the Tamiment Library in New York City and dedicated to his children. 7