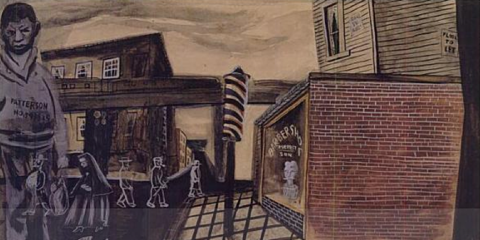 Noda was a Japanese-American modernist painter and muralist who gained fame in 1933 after he assisted Diego Rivera on his notorious mural “Man at the Crossroads.”

His painting about the Scottsboro Boys (pictured above) from 1933 or 1934 won him further notice, and he wound up at a major Whitney Museum exhibition 1934-1935.

(As a painter, Noda followed in the footsteps of Chambers’ wife Esther Shemitz at the Art Students League, in the John Reed Club, and as an artist concerned about African-American rights, as was her friend, Grace Lumpkin.)