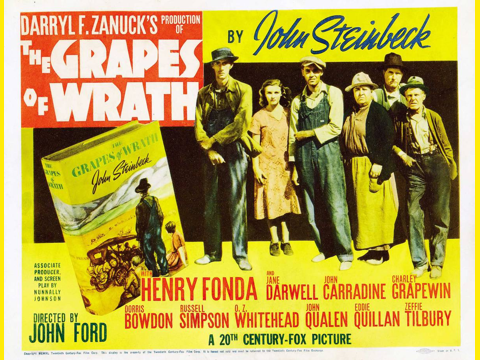 Corliss contextualizes the movie and its impact on its 75th anniversary. Remembering that Gone With the Wind had comes out only shortly before, he notes that “both were turned into movies that dared to be true to the books’ controversial themes.”

Regarding Whittaker Chambers, who wrote TIME’s review of the movie in 1940, he wrote:

The man who reviewed The Grapes of Wrath for TIME had a more complex career biography. Before coming to the magazine in 1939, Whittaker Chambers had already written journalism and fiction for the Communist paper The Daily Worker, 1 translated Felix Salten‘s Bambi into English and served as a spy for the U.S.S.R. against the U.S. government. Riven by news of the 1938 Moscow Trials, Chambers defected from the Party and was hired by TIME. Toward the end of his tenure as Senior Editor, he was the star witness testifying against Alger Hiss in the most prominent espionage trial of the postwar years. TIME has harbored some famous movie critics — James Agee, Manny Farber, Richard Schickel—but none so notorious.

See Corliss’ review here — which includes mention of a “vat of his conflicted political passions” poured into his otherwise review of the movie.

See Chambers’ review of the Grapes of Wrath in the February 12, 1940, issue of TIME Magazine.