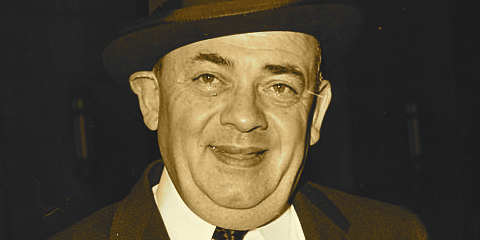 Professor Stephen Salant has posed some of his findings to WhittakerChambers.org, as follows:

There is an aspect of the Hiss case that has not received adequate attention: the involvement of U.S. Army counterintelligence.

In October 1948, while Whittaker Chambers was still insisting under oath that Hiss was a Communist but not a spy and that he had no evidence to the contrary, the law firm Hiss had retained in his libel suit hired a detective who was immediately replaced by Horace Schmahl—who claimed to have expertise in “Trial Preparation.” Schmahl became Hiss’s Chief Investigator in the case, the one who later launched the Defense’s search for Hiss’s typewriter, etc.

He turns out to have been an undercover Special Agent of the Army’s Counter Intelligence Corps [(CIC)]. He even confided to the FBI that he was really working for Military Intelligence.

Imagine having an agent of the government sitting in on what you thought were confidential meetings with your lawyer. What PRECOGNITION led the CIC to place him in that position before Chambers first “remembered” that Hiss had given him incriminating documents and that he still retained them? This seems hard to explain.

My personal guess is that U.S. counterintelligence (rightly or wrongly) thought Hiss was a spy in the 1940s (long after Chambers last saw him) based entirely on independent evidence which it felt it could not reveal and that the evidence surrendered by Chambers was cooked up to convict a man counterintelligence thought was guilty of espionage.

Do others have insight into these findings?

Replies and comments are welcome for consideration—so long as they omit ad hominem attacks on any party involved.