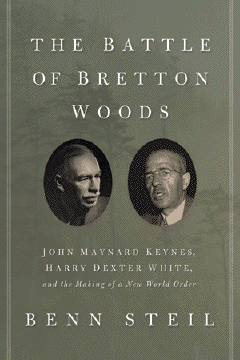 The review mentions White’s relationship to Soviet communism and to Whittaker Chambers:

In the end, it remains difficult to say why Harry Dexter White acted as he did. Why did a Soviet spy construct a system that helped save and indefinitely prolong world capitalism? It is in the nature of espionage that documentation is rare and inaccessible, and witnesses lie. What evidence we have suggests something like the following about White’s career: in 1934, when he was an academic, the US Treasury asked him to report on the problem of a monetary standard. His response already included basics of what became the Bretton Woods system: a case against both the gold standard and floating exchange rates (the latter of which White regarded as practically feasible, but politically unlikely) and a case for the adjustable peg, to be kept in place by an international monetary fund. This report got him a longer term job at the Treasury. Sometime after this, White began passing information to Whittaker Chambers, a GRU agent. One memorandum in White’s handwriting survives, and though it contains little if anything that qualifies as actual confidential information, perhaps other, vanished memos contained secrets for the Soviets. According to Chambers, White was keen also to send the Soviets his plan for monetary reform in the USSR, and the Soviets were eager to have it.

After a religious revelation, Chambers left the Soviet service in about 1938, and said he warned White to do the same. Beginning in 1941, messages from NKVD’s Moscow headquarters to their New York office expressed the desire to make White an effective source; replies from New York said White was uninterested and expressed doubt as to whether he knowingly aided GRU (the two agencies were sufficiently separate that one did not know the other’s sources). Finally, in 1944, as Bretton Woods was being negotiated, Moscow directed New York to tell White he “must” co-operate – a phrasing that contained at least an implicit threat of exposure, or worse. Then, and for a time afterward, White spoke to NKVD agents. His 1948 Congressional testimony denying connections to Soviet espionage was false.

And yet White did not substantially accede to Soviet demands for alterations to Bretton Woods, either in private meetings at the Treasury early in 1944, or at the conference itself. His economics never appeared to derive from or aim at Marxism. Keynes certainly was not a Marxist, and the disagreements between them derived from White’s being more conservative – more attached to traditional money, less willing to extend indefinite credit – than Keynes.

Steil writes at one point that Franklin Roosevelt, who took the US off the gold standard in 1933 and oversaw planning for Bretton Woods, “had only the foggiest grasp of macroeconomics.” Perhaps, but to be fair, nobody else had much more. The Great Depression so demolished preconceptions that it left what the economist John Kenneth Galbraith calls “a poor state of economic intelligence.” What Roosevelt understood clearly, and aimed at from the time he took the US off the gold standard through to the time he committed the US to Bretton Woods, was the principle that economics needed to aim at general prosperity – a goal his policies, domestic and foreign, achieved better than their gilded forebears.

TLS may publish a letter to the editor about this review.